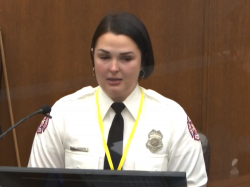 The first week of the murder trial of Derek Chauvin, the former Minneapolis police officer charged with killing George Floyd, has been an emotional one. Witnesses who watched Chauvin pin the 46-year-old Black man by the neck with his knee described the trauma they had to live with afterward. They said they were upset and desperate to save Floyd’s life; several testified to calling the police on the police. Four of the witnesses on Tuesday were under 18 at the time of Floyd’s death — the youngest is now 9 — and testified with the cameras off, their voices wavering and sobbing as they narrated the nine minutes and 29 seconds they saw Floyd “fighting to breathe.”