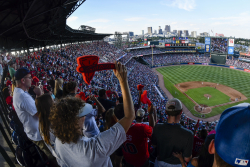 I love major league baseball. And not just major league. I’ve stopped to watch high school and even Little League games in the hope of identifying the next Mike Trout. I’ve subscribed to MLB.TV for years so that I could follow my beloved White Sox even after moving away from Chicago. I even watched all of the spring training exhibition games in March.

How, then, could someone who’s loved baseball for decades decide to cancel his only chance to watch his team — especially when it’s loaded this year with power and pitching such as it’s not had since the team last won the World Series in 2005?

The answer is that when push comes to shove, I love my country more than I love baseball. Unfortunately, MLB just went from pushing to shoving me — out of my lifelong love for the game. This past weekend, the league announced that due to its opposition to Georgia’s newly passed voter ID law, it is moving this year’s All-Star Game out of Atlanta.

Baseball Commissioner Robert D. Manfred Jr. issued the following statement on April 2: “I have decided that the best way to demonstrate our values as a sport is by relocating this year’s All-Star Game and MLB Draft. Major League Baseball fundamentally supports voting rights for all Americans and opposes restrictions to the ballot box. … Fair access to voting continues to have our game’s unwavering support.”

The best hitters are said to be able “to read the stitches on a fastball.” But their commissioner appears unable to read the printed words in Georgia’s law. Read it, and you will find that there is nothing in it that remotely threatens “fair access to voting.”

But there is good news: The overwhelming majority of Americans — of all races — know better than Manfred and strongly support voter ID laws. A new Rasmussen Reports survey finds that 75% of likely voters agree with Georgia that some form of photo ID should be required in order to cast a vote. Sixty percent of Democrats support such laws, with 89% of Republicans joining them. Moreover, 77% of politically unaffiliated voters feel likewise.

But what about the argument that voter ID laws discriminate against African Americans and other minorities? Fully 60% of respondents believe that requiring photo IDs at polling places is not discriminatory. Among Republicans, 79% say the same, while 67% of unaffiliated voters agree. A bare majority (51%) of Democrats deem the laws discriminatory.

But this raises the inevitable question: How do minorities themselves feel about voter ID laws?

The Rasmussen survey reveals that 69% of Black voters say photo IDs should be mandatory for voting. Among other minorities surveyed, 82% say the same. Nearly three-quarters (74%) of white voters agree.

In fact, the Rasmussen survey finds that “Support for voter ID laws has actually increased since 2018, when 67% said voters should be required to show photo identification such as a driver’s license before being allowed to vote.”

In this light, it becomes clear that MLB’s moving the All-Star Game betrays the overwhelming majority of Black and other minority viewers. Thus the subject line of my email to MLB Customer Service: “Cancel my subscription immediately.” In my letter of explanation, I closed with this: “MLB’s mistake in this matter will likely lead to far more cancellations than mine alone.”

Apparently, Woke Social Justice Ideology has mandated that Americans can’t simply watch sports and have fun doing it. Instead, they must be lectured to. Ceaselessly. And all this is being done by the very people whose livelihoods depend on our paying to watch their games.

The game I’ve loved since I was a child has been taken from me. It is time for me to put away childish things.

Boykoff A longtime lawyer for the state of Wisconsin whose volunteer work involved literacy and libraries, Thomas Boykoff had some

India’s Covid-19 vaccines are running out, as second wave accelerates