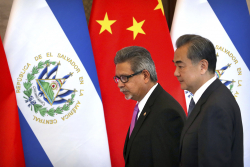 For the third time in the past 10 years, migration flows from Central America to the United States have reached a crisis point at the southwest U.S. border. Most of these migrants are from the Northern Triangle countries of El Salvador, Guatemala, and Honduras. These countries each face significant governance issues, resulting in violence and stunted economic opportunities that lead many of their citizens to make the perilous journey north.

As the Biden administration and Congress work to address the root causes of this crisis, they must also tackle its strategic implications. China’s growing activity in the Western Hemisphere threatens to undermine U.S. influence in the region and exacerbate the governance challenges facing the Northern Triangle. By bolstering economic ties in the region and focusing on improving governance, the U.S. can address the key drivers of the migration crisis, push back on the growing malign influence of the Chinese Communist Party in our hemisphere, and improve American economic competitiveness by creating alternative supply chains beyond the reach of Beijing.

The economic challenges facing the Northern Triangle and the rest of Latin America have provided an opportunity for China to expand its influence in the region at the expense of U.S. interests. Beijing’s recent no-questions-asked investments in the region have primarily focused on resource extraction and infrastructure projects, which have undermined progress many countries have made to diversify their economies while consistently prioritizing skilled jobs for Chinese workers. Furthermore, Chinese investments have provided ample opportunities for official corruption at the highest levels. In April 2019, the U.S. sanctioned Nicaraguan President Daniel Ortega and his family for using a canal project backed by Chinese investment to launder money.

In the Northern Triangle, China is already making inroads. El Salvador switched its Chinese diplomatic recognition from Taiwan to the People’s Republic of China in 2018, and President Nayib Bukele signed memorandums of understanding for $500 million in potential Chinese development projects during a 2019 state visit to Beijing. While Guatemala and Honduras still recognize Taiwan, China continues to push countries across the region to abandon the island with promises of significant investment.

To combat China’s investment and influence campaign, the U.S. should double down on its economic commitment to the region. The proximity of the Northern Triangle to the North American free trade area provides an opportunity to integrate El Salvador, Guatemala, and Honduras into U.S. supply chains at a time when many American and Latin American companies are actively seeking alternatives to China. One approach proposed by Matthew Rooney at the George W. Bush Institute would allow companies manufacturing in Mexico to source components in Central America and bring them to the U.S. duty-free under the U.S.-Mexico-Canada Agreement. This policy would incentivize manufacturers to relocate operations from China to the region to support production in Mexico. Connecting North American supply chains to Central America and continued economic assistance could create a significant number of local jobs, providing opportunities for many who might otherwise consider leaving their countries in search of work.

The full promise of these economic measures, however, cannot be realized unless governance improves in the region. According to a recent Wilson Center report co-authored by Ricardo Zúñiga, the State Department’s new special envoy for the Northern Triangle, the combination of entrenched corruption and elite resistance to political and economic reforms in the region is “the most important contributing factor to limited growth and social progress.” Despite decades of U.S. foreign assistance, these governance issues have left governments in these three countries largely unable to address the widespread poverty, violence, and hunger that has continued to mar the lives of many of their citizens.

Backed by renewed U.S. commitment, a governance-focused approach to the region can help drive meaningful change. To start, the Biden administration should develop an accountability strategy that utilizes targeted sanctions and visa restrictions, through the new Engel List, the Global Magnitsky Act, and other authorities, to hold corrupt officials accountable and incentivize changes in behavior. The U.S. should also reward governmental organizations and non-governmental actors for reform and accountability efforts through political support, aid, and technical assistance.

For far too long, foreign policymakers in Washington have given inconsistent attention to the problems facing the Northern Triangle and rising Chinese activity on our doorstep. And these issues also have broader reach. As AEI research fellow Ryan Berg recently told the Senate Foreign Relations Committee, the contest between democratic values and Chinese-supported authoritarianism is a significant challenge facing the U.S. and its partners across Latin America. In the midst of yet another border crisis and escalating economic and geopolitical competition with China, Congress and the Biden administration should seize this opportunity for leadership in our own backyard. The futures of millions of our neighbors depend on it.

Connor Pfeiffer is a former senior congressional aide to former Congressman Will Hurd (R-Texas). He advised Hurd on national security, immigration, and technology issues, including U.S. foreign policy in Latin America. His Twitter handle is @ConnorPfeiffer. The views expressed here are his own.

GENEVA, June 21 (Reuters) – The World Health Organization (WHO) said on Monday that it is setting up a technology