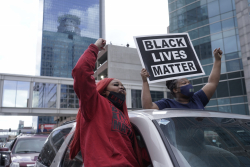 The technology to record the murders of Black Americans has actually been with us for a very long time. There are lots of photos of 19th- and early-20th-century lynchings, though most are long shots, taken so the viewer can’t identify the specific individuals at the front of the mobs. Even when they were identifiable, however, no one with even a smidgen of power suggested charging them with a crime.

Oregon’s most populous county ranks fourth in the state for its share of residents partially or fully vaccinated against COVID-19.