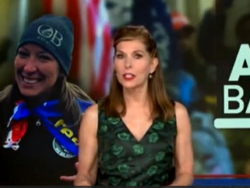 SHARYL ATTKISSON: Four months after the Capitol riots, one verdict is in: there was only one homicide that day. That of an unarmed protester Ashli Babbitt at the hands of a U.S. Capitol Hill police officer. Prosecutors announced they will not charge the as-yet unidentified officer, an African-American lieutenant on the force. But that’s not the end of the story. Today, we hear both sides in one of the most shrouded police shootings of our time. A caution, some viewers may find some of the material disturbing.

Three months later, she set off for Washington D.C. and joined an estimated tens of thousands of like-minded Trump supporters at a rally protesting what they see as a “stolen election.”

Not long after a photo of Ashli Babbit draped in a pro-Trump campaign cape was taken, she marched to the U.S. Capitol where Congress was certifying the 2020 election results.

There, unarmed and still wearing the cape, Babbitt started to climb through a broken window and was shot dead by a plainclothes Capitol Police lieutenant.

Terrell Roberts: She’s not brandishing a weapon, so he’s shooting an unarmed individual who is not assaulting him or threatening him.

Sharyl: A prevailing sentiment that I’ve read is, these were insurrectionists who were going to threaten people’s lives and they deserved, or she deserved what she got.

Terrell Roberts: So for someone to say, “Well, she got what she deserved.” without understanding what the law is, is not an informed decision, I would say. If this case happened out in Minneapolis or some other place, and it wasn’t politically charged, I think that most people would see this as an obvious case of excessive force.

Ironically, the clearest video of the shooting was recorded by John Sullivan, an activist who spoke at a Black Lives Matter rally in Washington DC last August, where he encouraged an insurgency against President Trump.

Months after that speech, Sullivan says he masqueraded as a Trump supporter at the January rally, and recorded the chaos inside the Capitol.

Terrell Roberts: We have that video. Ashli Babbitt is a part of that crowd. Then you can see some individuals, they do get physical. They start to hit the door, break some of the windows. There are three officers present at that point. And they move out of the way.

Sharyl: Would part of your case be figuring out why the police officers on Ashli Babbitt’s side of the door and the SWAT team did not move to keep the crowd from climbing through or trying to enter?

Terrell Roberts: You’re right. That’s exactly what we’re going to try to find out, why that was. We’ll find out. But it’s clear that’s what they’re doing, they’re actually abandoning the door, and it’s an interesting fact of the case. And at that point, one of the side windows to the door is knocked out. SWAT officers come up the steps. It’s at this point that Ashli gets up onto the ledge and she is shot before she even steps off the ledge. At the time that this officer shoots, there’s no member of Congress in that lobby. So I think all this adds up to a situation where the officer did not need to shoot and kill the lady.

The attorney for the Capitol Police officer declined our interview requests. I spoke with Jason Johnson, a former Baltimore Deputy Police Commissioner who heads up the Law Enforcement Legal Defense Fund.

Sharyl: Let’s talk about what might have been in the mind of the officer. What are you seeing and what is he potentially thinking in that moment based on the information he has?

Jason Johnson: I think because of the information that he likely has at that point about what is happening in other parts of the capital complex with officers being assaulted, subjected to chemical agents, beaten, the fact that many people are armed and that they are after certain members of Congress, that that officer felt in that moment, that if that entry is breached by that, that group of people, likely several of whom were armed, that that would present a deadly threat to either himself, members of Congress, other Capitol police officers, other members of Congressional staff, and therefore believed that he was acting reasonably to use deadly force.

Investigators agreed. “Acknowledging the tragic loss of life and offering condolences to Ms. Babbitt’s family,” prosecutors said there’s no evidence the officer did not reasonably believe the fatal shot was necessary “in self-defense or in defense of the Members of Congress and others evacuating the House Chamber.”

Sharyl: We now know that prosecutors are not going to charge the police officer who shot Ashli Babbitt. What’s your response to that?

Terrell Roberts: Well, first of all, the fact that a prosecutor doesn’t bring charges in a case does not affect the right to bring a civil action.

Roberts says he plans to bring a suit arguing the officer violated the constitutional rights of Babbitt, an Air Force veteran.

Among the areas of disagreement: the officer’s attorney says he clearly identified himself before shooting, and ordered the mob not to come through the window. Roberts says there’s no sign of that on the video.

Sharyl: How can you be sure in the video, particularly because it was loud, that he didn’t issue a warning?

Terrell Roberts: We’ve interviewed several witnesses on the same side of the door with Ashli Babbitt. They didn’t hear any kind of warning. I think a reasonable officer would know, given the noise on the other side of the door, that anything that he’s saying would not be heard. In fact, if you watch the video carefully, there’s an officer in a suit that strolls across the hallway at the time that he is supposedly yelling an announcement, who doesn’t even seem to react to that. So those are three important factors why we think he didn’t give an announcement.

One of the strangest parts of the case is the unusual secrecy: the name of the officer is being kept hidden. That’s possible because of the nature of the Capitol Police force. They’re under the authority of Congress and—like Congress—are exempt from Freedom of Information requests. And they don’t wear body cameras.

Sharyl: Do you anticipate any sort of racial component or sensitivities because the alleged shooter is allegedly an African-American and Ashli Babbitt is white? Or was white?

Terrell Roberts: The case must be looked at independent of the politics, independent of the racial information in the case. The unfortunate part, though, is that people take it into account. However, when the case gets into a courtroom, if people would just put that to the side and look at the case fairly, I believe they’re going to see, they’re going to follow the law, apply the law fairly and reach a just result.

Sharyl (on-camera): In a statement, an attorney for the officer insists his “bravery was nothing short of heroic and by shooting and killing Babbitt, he saved the lives of countless members of Congress and the rioters. The nation owes him a debt of gratitude.”

Olympics 2021 COVID-19 tracker: Everyone who has tested positive for coronavirus at the Games

As Americans navigate conflicting COVID-19 mask advice, ‘everyone is confused’