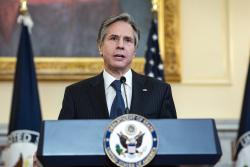 On March 30, in remarks presenting the State Department’s 2020 Human Rights Report,  Secretary of State Antony Blinken made good on his promise at his January Senate confirmation hearing that “the Biden-Harris administration would repudiate” the report of the Commission on Unalienable Rights. (Harvard Law School Professor Mary Ann Glendon chaired the COUR; I served as its executive secretary.) He did so, he said, “decisively.” The commission’s report did not “represent a guiding document for this administration,” according to the secretary, because it was “unbalanced.”

In mischaracterizing and summarily rejecting the COUR’s report, Blinken betrayed the high-minded aspiration to unite the country that President Biden expressed in his inaugural address. “Today, on this January day,” Biden vowed only two months earlier, “my whole soul is in this: Bringing America together. Uniting our people. And uniting our nation.”

Fairly read, the COUR report offered the new administration an excellent opportunity to honor the president’s pledge to promote unity at home and, in so doing, strengthen America’s ability to advance fundamental freedoms and basic rights abroad. Instead, by groundlessly accusing the COUR report of promulgating erroneous and harmful views about human rights, Secretary Blinken fosters disunity at home and weakens America abroad.

In fact, much of what he had to say about human rights and U.S. foreign policy on March 30 echoed the report that he disparaged and dismissed.

Secretary Blinken emphasized the universality of human rights: “All people are entitled to these rights, no matter where they’re born, what they believe, whom they love, or any other characteristic.” The COUR report said much the same and in respects went further. It stressed that “unalienable rights” was the term America’s founders used to speak of the rights inherent in all persons, and that because the nation’s constitutional order is grounded in universal rights, the United States has not only an obligation to secure them at home but also an interest in, and responsibility for, fostering respect for them abroad.

Secretary Blinken asserted, “Human rights are also interdependent.” The COUR report elaborates that point, showing in its exposition of the history, text, and structure of the Universal Declaration of Human Rights (UDHR) that the founding document of the great post-World War II human rights project “was written and understood as an integrated set of interlocking principles.” Accordingly, the COUR report maintained, “it does violence to the Universal Declaration to wrench out of context any one of its rights at the expense of others, or to ignore one part of the document by focusing exclusively on another.”

Secretary Blinken observed that respect for human rights is declining “in every region of the world.” The COUR report grew out of such concerns: “the ambitious human rights project of the past century is in crisis. The broad consensus that once supported the UDHR’s principles is more fragile than ever, even as gross violations of human rights and dignity continue apace.”

Secretary Blinken highlighted China’s egregious violations of human rights. The COUR report did so as well. While calling special attention to “the genocide being committed against the predominantly Muslim Uyghurs and other ethnic and religious minority groups” in Xinjiang, Blinken omitted his reliance on the official State Department determination of his predecessor, Secretary Mike Pompeo.

Secretary Blinken underscored the threat to human rights posed by “the ways authoritarian governments are using and exporting new technologies to surveil and harass.” In a section on new challenges to human rights, the COUR report made that very case and explained how the Chinese Communist Party leads the assault.

Secretary Blinken rejected the idea “that it’s not worth it for the United States to speak up forcefully for human rights.” For overlapping reasons, the COUR report urged the United States to champion human rights “with renewed vigor, with pride in what has been accomplished, with humility born of the awareness of her own ‘shortcomings and imperfections’ and of the complexities of world politics, and with the heavy knowledge that the future of freedom is bound up in no small way with the vitality of her commitment to her own constitutional tradition, rooted in unalienable rights.”

Secretary Blinken argued that “governments that respect human rights” tend to be more “peaceful, prosperous, stable” and “are more likely to support the rules-based international order.” This is in agreement with the COUR report, which contends that the United States’ grounding in unalienable rights gives it “an interest in supporting liberal democracy as the form of government best suited to protecting rights; in promoting a freer and more open international order, one that is friendlier to claims of human rights and democratic self-government; and in standing with peoples everywhere who seek the dignity that comes from living under a government that respects individual freedom and equality under law.”

And Secretary Blinken denied that “because we have work to do at home” the United States must refrain from criticizing the abuse of rights elsewhere. This reflects the COUR report’s position: “In the war of ideas between liberal democracy and autocracy, the uneven progress of liberal democracies does not invalidate the lofty goals to which they are dedicated.”

With so much agreement on so many vital matters, why would Secretary Blinken take the trouble to showcase his “repudiation” of the commission’s work?

Based on the salvos of progressive criticism — from Capitol Hill, human rights organizations and activists, and scholars and journalists — directed at the Commission on Unalienable Rights commencing with Secretary Pompeo’s establishment of it in the summer of 2019 and continuing through publication of the report, it is reasonable to suppose that Blinken and his team’s primary objections are threefold.

First, Blinken and his team oppose the report’s descriptive claim that the great post-World War II human rights project is in a state of confusion. Yet the alacrity with which Secretary Blinken repudiated the commission’s work reflects — and exacerbates — the partisan division over human rights that the commission diagnosed and sought to ease.

Second, Blinken and his team disapprove of the report’s explicit grounding of America’s commitment to human rights in the nation’s founding principles and constitutional order. But contrary to the progressive belief that such grounding undercuts the universal claims of human rights, the UDHR itself is rooted in the conviction that nations and peoples will justify agreed-on human rights by appeal to their own moral, national, and religious traditions.

Third, Blinken and his team fault the report, as he made explicit in his March 30 remarks, for espousing a “hierarchy that makes some rights more important than others.” But their quarrel is with the Universal Declaration of Human Rights and not with the commission. As the report observes, while the UDHR rests on “the principle of the interdependence of basic human rights,” it also recognizes distinctions among them. For instance, in some cases the UDHR states blanket prohibitions: “No one shall be held in slavery or servitude”; “No one shall be subjected to torture or to cruel, inhuman or degrading treatment or punishment”; and “No one shall be subjected to arbitrary arrest, detention or exile.” At the same time, it allows for variation in the implementation of social and economic rights “in accordance with the organization and resources of each State.” Consistent with the UDHR, as the commission stated, “International law accepts that some human rights are absolute or nearly so, admitting of few or no exceptions, even in times of national emergency, while others are subject to many reasonable limitations or are contingent on available resources and on regulatory arrangements.”

The Biden administration’s repudiation of the work of the Commission on Unalienable Rights not only reinforces domestic divisions but also imposes diplomatic costs. What will Secretary Blinken say, for example, to Nahdlatul Ulama — headquartered in Indonesia and, with 90 million members, the world’s largest independent Muslim organization — which embraced the commission’s analysis of human rights and welcomed the report’s invitation to the world’s diverse nations and peoples to seek sources for affirming fundamental freedoms and basic rights in their distinctive traditions?

To effectively champion human rights abroad, the United States State Department must recognize and reaffirm the convictions about the rights inherent in all persons embodied in American’s founding principles, which transcend America’s partisan divisions.

Peter Berkowitz is the Tad and Dianne Taube senior fellow at the Hoover Institution, Stanford University. In 2019 and 2020, he served as Director of Policy Planning at the U.S. State Department. His writings are posted at PeterBerkowitz.com and he can be followed on Twitter @BerkowitzPeter.