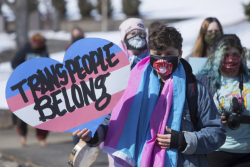 One year ago, the Supreme Court issued the groundbreaking ruling in Bostock v. Clayton County that bans employment discrimination based on sexual orientation and gender identity.

In his 6-3 majority opinion, Justice Neil Gorsuch, a conservative jurist appointed by President Trump, noted that “an employer who fires an individual for being gay or transgender fires that person for traits or actions it would not have questioned in members of a different sex.”

This decision was historic, but critical gaps remain in our federal civil rights laws that leave LGBTQ Americans vulnerable to discrimination in many aspects of their daily lives. It’s now time for our fellow Republicans to heed the calls of religious leaders, business professionals and the American people to take the next step in expanding liberty for all by codifying nondiscrimination protections into law.

While many are surprised to learn that our nation lacks a comprehensive federal law prohibiting discrimination against gay and transgender people, it’s a fact of life for millions of our fellow Americans. Despite overwhelming support for LGBTQ rights and equality among Democratic, independent and Republican voters, a majority of U.S. states — 29 in total — lack comprehensive and explicit anti-discrimination laws. Rectifying this failure of public leadership is long overdue. The time for Congress to act is now.

That’s why we have joined together to form the Conservatives Against Discrimination Leadership Council. Our focus, along with that of a prolific group of conservative public leaders spread out across America, will be to encourage elected Republicans to engage in bipartisan collaboration to make federal LGBTQ nondiscrimination protections a reality. Passage of these protections will make our country stronger, more competitive, and codify into law the very pillars of personal freedom and liberty this country was founded on more than 200 years ago.

The Equality Act, legislation that would secure comprehensive nondiscrimination protections for LGBTQ Americans, recently passed the U.S. House with bipartisan support and is currently under consideration in the United States Senate. When the Senate Judiciary Committee held its first hearing on the bill in March, Sen. Thom Tillis (R-N.C.) expressed willingness to forge collaboration and compromise to expand protections for LGBTQ Americans in a manner that “prevents discrimination against anybody in the community” and “protects Americans of faith.” Since that time, multiple leaders on Capitol Hill, including members of both parties, have expressed a willingness to negotiate in good faith to make these hopes a reality.

Senators will be heartened to learn that these common-sense protections enjoy broad-based public support, including from 62% of Republican voters. This level of support is even more encouraging to conservatives when taking into consideration Americans’ religious affiliation. The Public Religion Research Institute found in its recently released American Atlas survey that more than six in 10 members of every religious group support nondiscrimination laws.

As of May 1, support for passage of nondiscrimination protections has also been formally endorsed by more than 400 companies that employ 14 million people and operate in every state across the country. An additional 60 business organizations, including the National Association of Manufacturers, the National Restaurant Association, and the U.S. Chamber of Commerce, have endorsed the Equality Act. This broad groundswell of support across the public, private and nonprofit sectors should encourage elected leaders of both parties to negotiate in good faith and find common ground in advancing legislation.

Everyone should have the freedom and opportunity to work hard, earn a living, provide for their families and contribute to communities. These aren’t just conservative values — they’re American values. Let’s unite, collaborate and take the next step to make equality for all Americans a bipartisan achievement this Congress. Republicans should take the lead in forging bipartisan consensus. There’s no time to waste.

Ileana Ros-Lehtinen is a former Republican U.S. representative from Florida and the first Latina elected to Congress.

Trey Grayson is a Republican and the former secretary of state of Kentucky.

The COVID-19 Delta Variant: What to Know