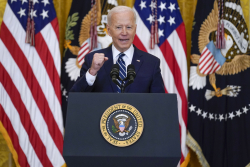 For four long years, Donald Trump led Republicans to all kinds of weird places they didn’t want to go — or shouldn’t have wanted to go. Hostility to free trade, a ban on travelers from Muslim countries, praising foreign dictators, deriding an Indiana-born federal judge as “a Mexican” — these are not traditional conservative actions or ideas. Yet, President Trump was, as the saying goes, “the titular head of the Republican Party,” and so the GOP was stuck with his baggage: the good, the bad, and the ugly.

Joe Biden ran for president promising to end the ugliness, and to work at uniting the country. He vowed repeatedly that, as president, he’d work as hard for those who voted against him as for those who supported him. In his inaugural address, he spoke evocatively about Americans not demonizing one another. Think of those who disagree with you politically as neighbors, he said, not enemies. As for his policies, unlike Trump, Biden embraced the mainstream thinking in his political party. But that positioning is proving incompatible with his desire for national “unity.” Americans are witnessing the flip side of the Trump dynamic. Biden isn’t leading, he’s following. And the Democratic Party is taking Biden to places he shouldn’t want to go.

In his first presidential news conference, Joe Biden attacked Republicans over voting rights. Democrats say they want to make it easier for all Americans to vote. God bless them for that. Republicans respond that they want to ensure that new voting procedures don’t lead to voter fraud. In a sane and civil political environment — the kind candidate Biden said he wants to restore — the nation’s two major political parties would seek the middle ground: obliterating barriers to voting, but with safeguards.

But that is neither the environment Biden inherited nor the one he is fostering. Instead, he attacked the GOP position in Georgia and other states as “pernicious,” “sick,” “un-American” — and utterly racist. “This makes Jim Crow look like Jim Eagle,” Biden said. “I mean, this is gigantic, what they’re trying to do.”

Speaking specifically of Georgia, Biden added in an official statement the next day, “Among the outrageous parts of this new state law, it ends voting hours early so working people can’t cast their vote after their shift is over.” This is a falsehood: Although the new Georgia statute does contain a goofy provision barring partisan activists from furnishing water or food to those waiting in line to vote, it neither closes the polls early nor restricts early voting. It expands early voting.

Although invoking Jim Crow was insidious, it didn’t spring from Biden’s brow: It’s a Democratic Party talking point. But if anyone in that party is old enough to know better — and experienced enough to resist race-baiting — it’s the 78-year-old president.

“Jim Crow,” originally a minstrel act before the Civil War, came to mean a series of laws and customs that took root in the Deep South during Reconstruction. The civil rights movement was about dismantling them. There was a lot to dismantle. Jim Crow wasn’t about asking someone for a driver’s license as a prerequisite for voting. It was about literacy tests and poll taxes to prevent former slaves or their descendants from ever voting. It entailed laws against interracial marriage and menacing social taboos prohibiting conversation between white women and black men. Jim Crow meant official segregation in schools and workplaces, an economic system designed to favor whites, and a criminal justice system without black lawyers, judges, or even jurors. This vast and sinister apparatus of American apartheid was enforced by white sheriffs, white judges, and white juries — and if that didn’t work, at the point of a gun or the end of rope by armed white mobs.

In 1942, the year Biden was born, two black youths, Ernest Green and Charlie Lang, were castrated and then hanged from a bridge in Clarke County, Mississippi. Ernest was 14 and Charlie was 15. Their offense was the “attempted rape” of a white girl their own age. As best anyone can tell, the boys never touched her.

Even before that lynching, that span over the Chickasawhay River near the small town of Shubuta was known locally as “the hanging bridge.” Twenty-four years earlier, four blacks were lynched there:  Major Clark and his younger brother Andrew, along with sisters Maggie and Alma Howze. The quartet ranged in age from 16 to 24; both sisters were pregnant. They were most likely impregnated by the white man who was fatally shot as he milked a cow. Although Major Clark was tortured by a sheriff’s posse until he confessed, he was almost certainly innocent.

That same year, 1918, a pregnant woman in Georgia was also lynched. She was among the many victims murdered by a frenzied Valdosta mob. It started when a white man who was known to abuse and cheat both black and white laborers was shot in a dispute over wages. Over the next three days a dozen local African Americans were lynched, including the supposed shooter and a woman whose only offense was trying to swear out a warrant against the leaders of the mob for killing her husband. Her name was Mary Turner and she was hung upside down and lit on fire. Mary Turner was eight months pregnant. Her baby was cut from her body by the mob and shot.

In 1955, the year that 13-year-old Joe Biden moved with his family from Scranton, Pa., to Wilmington, Del., Emmet Till, only a year older than Joe Biden, left his home in Southside Chicago for a summer trip to his family’s ancestral home in Mississippi. He never made it back to Chicago, brutalized and murdered for deigning to speak to a white lady.

In 1957, when Biden first strode into St. Norbert Hall at Archmere Academy in Claymont, Del., four houses of black residents of Birmingham, Ala., were bombed by white supremacists. Ralph Abernathy’s Montgomery church and home were bombed on the same night. Three other black churches in Montgomery were dynamited that night, as well as the home of a white pastor — for the second time in less than a year — who had been active in the city’s bus boycott.

Months later, four Ku Klux Klansmen ambushed 24-year-old Winn-Dixie truck driver Willie Edwards Jr., beat him, and forced him at gunpoint to jump to his death off an Alabama River bridge. Edwards, a married father of two daughters with a pregnant wife, was murdered for the same pretext as young Emmett Till — talking to white women he encountered on his route. In this case, the Klan didn’t even have the right victim. Edwards always stayed away from those kinds of situations: He was filling in for another driver that night. His lynching was as obscure as Emmett Till’s was notorious.

As Joe Biden started his freshman year at the University of Delaware in 1961, white students rioted after a federal judge ordered the University of Georgia to admit two well-qualified black students, Charlayne Hunter and Hamilton Holmes. In response, the school administrators issued suspensions — to Hunter and Holmes.

And so it went for the next four years: In 1962, riots broke out when James Meredith, a black Air Force veteran, enrolled at Ole Miss; in 1963, Birmingham’s 16th Street Baptist Church was bombed, killing four girls and earning Alabama the world’s revulsion; in 1964, three young voting rights activists — James Chaney, Andrew Goodman, and Mickey Schwerner — were ambushed and killed in Neshoba County, Mississippi.

In 1965, the year Joe Biden graduated from the University of Delaware with middling grades and a double major in history and political science, Jimmie Lee Jackson, a 26-year-old U.S. Army veteran, a husband and father and the youngest deacon in his church, was shot to death by a state trooper while shielding his family from police batons.

That’s the kind of bravery and sacrifice it took to get the vote in the South. And it explains why African Americans and civil rights leaders are so vehemently opposed to any efforts that they perceive as impediments to voting. What it doesn’t explain is why the 21st century Democratic Party and its titular leader would casually compare systematic racial terrorism that lasted generations to legislation requiring all Americans to show identification at polling places. This is more than cheap political demagoguery. It’s obscene.

When Donald Trump likened his being impeached to a lynching, living relatives of Willie Edwards and Emmett Till called this comparison “ignorant” and “insensitive” and “offensive.” They were right. But now Biden is invoking racist history, and doing it to score partisan political points. Millions of Americans who voted for him hoped they were done having to listen to such blasphemy from the White House. It took 65 days and one news conference to disappoint them.

Carl M. Cannon is the Washington bureau chief for RealClearPolitics. Reach him on Twitter @CarlCannon.

GREENSBORO, N.C. (WGHP) — Some are speaking out after Cone Health, Novant Health and Wake Health announced that COVID-19 vaccinations