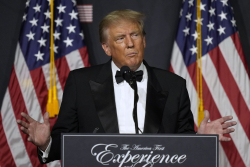 In the wake of the 2022 midterm elections, there have been calls from many key elements of the un-elected Republican party establishment – the elements which exist in think tanks, the media, and among major donors – to end the post-2015 "experiment" with conservative populism and presumably return to running "normal" Republicans, by which they seem to mean the Romney/Ryan wing who lost in 2008 and 2012.