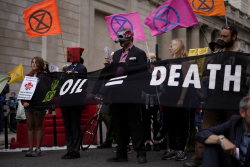 The election of Donald Trump threw the climate movement for a loop, as it did all movements on the left. Trump quickly repealed Obama’s Climate Power Plan and withdrew the US from the Paris Agreement. As the planet, they believed, was burning, the country was now being run by a "climate denier".