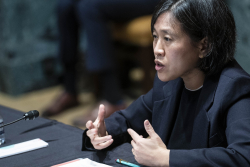 The crisis on our southern border has rightly received renewed attention and remains a top priority for the Biden administration to address, so much so that it  has tasked Vice President Kamala Harris with tackling this complex issue. As our elected officials work to manage the current influx of migrants and unaccompanied minors in a safe and humane way, it would be unwise to ignore the many contributing factors that got us here in the first place. And one of them is clearly our trade policies.

While this problem may seem overwhelming, given the variety of different trade policies and agreements that need to be updated to reflect our current globally integrated economy, our elected officials cannot let the enormity of the challenge prevent any positive action on this issue. If leaders like Vice President Harris, Trade Representative Katherine Tai (pictured), and National Security Adviser Jake Sullivan are looking for a place to start, the Dominican Republic-Central America Free Trade Agreement may be the answer.

The CAFTA-DR is the first free trade agreement between the United States and the Central American countries of Costa Rica, El Salvador, Guatemala, Honduras, Nicaragua, as well as the Dominican Republic. CAFTA-DR was designed to increase the economic prosperity of Central America and combat gang activity and civil unrest. But since it has become law, passing Congress by only a single vote, gang violence has increased in the region, economic growth has been uneven, and the migration of Central Americans searching for opportunities and safety in the United States has only increased.

The bottom line is that CAFTA-DR is not driving the economic growth and job creation the drafters and legislators who supported it had hoped. In particular, the economic prosperity in the region has been tenuous at best, and for some sectors the agreement has had the opposite effect. For example, CAFTA-DR includes rules and regulations that prevent additional jobs from being created in the region, which further limits economic opportunities for many of these Central American families.

An obvious example of a job-killing rule in this agreement states that apparel products must be made using U.S. and/or Central America-DR yarns, and that fabrics must be duty free. If these types of rules were updated to allow global yarns to be used, it would increase the different types of apparel that could be produced in CAFTA-DR countries, which would drive increased businesses and capital investment to the region and create tens of thousands of jobs in the apparel sector alone. It would also help supply chains to diversify away from China.

And the great thing is that these technical apparel rules in CAFTA-DR could be updated without completely renegotiating the agreement; indeed these technical rules are updated for all other products on a regular basis.

While it is understandable that the Biden administration is focusing on the issues of immediate concern, such as addressing the pandemic and housing the unaccompanied minors crossing our border, we cannot forget systemic issues that need to be addressed as well. And unless there are fundamental and structural changes to our trade policies, we can expect the influx of migrants from Central America to continue.

Brendan Flanagan is a Democratic consultant and a veteran of Obama for America.

GENEVA, June 21 (Reuters) – The World Health Organization (WHO) said on Monday that it is setting up a technology