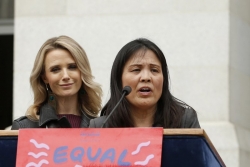 Gov. Gavin Newsom’s coronavirus lockdowns made California one of three states with the nation’s highest jumps in joblessness. Those pandemic policies are now the subject of a fierce national debate with the Golden State’s per capita rate of COVID cases similar to Florida’s, which imposed much lighter restrictions and began aggressively reopening last fall.

While jobless claims skyrocketed across the country last year, the California agency charged with doling out unemployment insurance botched its job of getting federal checks into the hands of eligible workers. State officials estimate that nearly a quarter of the $122 billion in federal payments was squandered, fraudulently sent to scammers, while more than a million deserving recipients have been left hanging for months without relief.

Over the last few months, a state audit and a Sacramento district attorney’s investigation have turned up an array of disturbing findings – the state’s Employment Development Department paid some $400 million in an estimated 35,000 unemployment claims to prisoners, including some big-name inmates. Inmates who made the claims include Scott Peterson, who was convicted of murdering his wife, Laci Peterson, while she was eight months pregnant, and Cary Stayner, who murdered four women near Yosemite Park in 1999. One person was able to scam more than $200,000 using the name of Sen. Dianne Feinstein.

With the yearly IRS tax filing deadline looming next month, there’s an alarming new element to the scandal: Many Californians who had their identifies stolen in these payment schemes are now facing federal tax bills for money they never received in part because the state failed to follow recommendations to stop using Social Security numbers in correspondence and because the EDD skipped withholding taxes in the interest of getting the money out more quickly.

If new estimates prove to be true that some $31 billion in federal taxpayer funds were lost to fraud, it will be the biggest financial scandal in state history, and at least some of the most egregious aspects of it could have been easily avoided. Unlike at least 35 other states, California lacks the technology to cross-check its state prisoner rolls against unemployment claims.

The massive unemployment mess has already given Newsom’s critics powerful ammunition for his recall, which organizers say they are confident will take place after reaching 1.95 million signatures on their petition. That’s far more than the 1.5 million to qualify by next week’s deadline and trigger a special election, a comfortable cushion for the 20% of signatures expected to be thrown out as unverifiable.

“I think there will be a rolling impact on the recall — because federal funds are involved, there should be pressure on the Biden administration to launch an investigation at the Justice Department,” Anne Dunsmore, the campaign manager for Rescue California, one of two main groups organizing the recall, said in an interview. “This is the kind of story where we just say Newsom’s our best asset.”

California’s embarrassing loss of taxpayer dollars is set to hit the national spotlight and a new level of intense scrutiny. Despite the fraud scandal at the state agency, President Biden nominated the California Labor & Workforce Development Agency’s secretary, Julie Su, to become the deputy secretary of the U.S. Department of Labor. The Senate is poised to take up her nomination early next week, K Street sources familiar with the timing told RealClearPolitics. An aide on the Senate Health, Education, Labor & Pensions Committee said Republicans are planning to grill Su over the “failures” in her current role and “whether she can be trusted to oversee a much larger agency based on these failures.”

Newsom so far has avoided the controversy over Biden’s decision to tap Su, who was a highly regarded worker-rights advocate before taking on the top state labor role in 2019.

“Julie Su embodies the spirit of California,” Newsom said in a statement reacting to the Biden nomination. “Her commitment to empowering working people and creating opportunity for every community to thrive is exactly why she is the best choice to serve our nation’s next deputy secretary of Labor role.”

The embattled governor didn’t address the tens of billions of dollars lost in EDD fraud, which took place under Su’s watch and which state officials are still trying to rein in. Newsom’s office didn’t respond to a RealClearPolitics request for comment.

The Congressional Asian Pacific American Caucus pushed hard for Su’s nomination to the top Labor post, but Biden chose her instead for the No. 2 position, possibly in part because the fraud scandal could become a distraction in winning confirmation to lead the agency. It’s been a rough year for many states’ labor department officials. Those running unemployment agencies in at least eight states, including Florida, Hawaii and Nevada, have resigned or been fired amid fraud schemes during the pandemic. In late October, California’s EDD director, Sharon Hilliard, retired amid the still-developing firestorm.

No one could have planned for the avalanche of unemployment insurance claims during the pandemic. But the fraud in California, which has accounted for 18.4% of the federal jobless benefit claims despite making up only 11.8% of the nation’s labor force, took place at a much larger scale than in anywhere else. The state auditor’s report found some of the fraud could have been avoided if administrators had followed reforms recommended a decade ago. The state had implemented a fraud-detection system but reportedly shut it off in 2016 when the federal grant paying for the $2 million per year program ran out.

The state agency also has struggled to hold on to its own work force. It has hired about 4,900 new employees since the pandemic hit but has lost 1,600 in the same time period over frustration with the overwhelming case load and the slow, bungled response.

“There is no sugar-coating the reality: California did not have sufficient security measures in place to prevent this level of fraud,” Su said in late January.

California Democratic lawmakers, including Speaker Nancy Pelosi, as well as Sens. Feinstein and Alex Padilla, have tried to shift blame for the fraud by calling for more help from the federal government to combat it. In late January, the trio urged Biden to establish a federal task force to combat organized criminal unemployment benefits fraud.

But Republicans place the blame squarely on the Newsom administration. California Senate Minority Leader Scott Wilk called Su’s possible promotion to the No. 2 spot at the U.S. Labor Department a prime example of the “Peter Principle.” The management concept, developed by Laurence Peter and explained in his 1969 book of the same name, maintains that people in hierarchies tend to win promotions until they reach a level where they are no longer competent.

“It’s interesting to me because you’ve got somebody getting promoted up to their level of incompetence,” he said. “It makes absolutely no sense to me except as [former California Gov.] Jerry Brown once told me, the No. 1 value in politics is loyalty and competence is No. 2,” Wilk told RCP. (Wilk also noted that has not signed the petition to recall Newsom and passed on a chance to become an honorary chair of the effort because he considers himself an institutionalist who prefers regular elections.)

While the pandemic is to blame for the flood of jobless claims, Wilk said the state auditor had recommended changes and reforms to the system in 2011 and again in 2016, while Newsom was serving as lieutenant governor. Wilk also recalled that in 2014 Newsom authored the book “Citizenville,” which called for a complete technology overhaul of how government handles information.

“So he came in the ‘tech governor,’ and it’s been an abject failure,” Wilk charged.

It also doesn’t help that at the time of Su’s nomination, Republicans were already incensed over another Labor Department appointment that doesn’t require Senate confirmation. President Biden tapped Suzi LeVine as his interim assistant secretary of the Employment and Training Administration, the agency charged with administering the unemployment insurance benefits, along with job training and worker dislocation programs.

The promotion came even though LeVine, Washington state’s Employment Security Department commissioner, which oversees the state’s unemployment insurance system, among other programs, has been under fire locally for failing to prevent hundreds of millions of dollars’ worth of fraudulent unemployment claims, along with a months-long backlog in getting checks to legitimate recipients. LeVine, a former top executive at Expedia, was a prolific fundraiser for the Obama-Biden 2008 campaign and became ambassador to Switzerland and Liechtenstein during the Obama administration.

Both appointments have sparked sharp rebukes from Republicans and the business community. House Minority Leader Kevin McCarthy, along with the 10 other members of the California GOP delegation, in early February wrote to Su and Newsom that California had the resources to combat fraud and failed for months to heed federal officials’ warnings about the potential.

Republican Rep. Dan Newhouse and two other members of the Washington state GOP delegation sent a similar letter to Biden about LeVine.

“Ms. LeVine’s dismal track record at the helm of the Washington State Employment Security Department and gross mismanagement of state taxpayer dollars is extremely concerning considering this new position puts her in charge of over $9 billion in taxpayer funds,” they wrote.

Back in December, when Su was one of several candidates under consideration for the top Labor post, the California Business and Industrial Alliance took out a full-page ad in the Wall Street Journal blasting her possible nomination and highlighting the EDD fraud headlines. When Biden named her to the deputy role, the Los Angeles Times editorial board questioned whether Su is “ready for Biden’s team” after the state’s unemployment system “collapsed” under her watch and as she still struggles to deal with the “baggage.”

While Senate Democrats’ razor-thin majority can muscle Su to confirmation, it’s Newsom who could pay a higher price for the unemployment meltdown, critics argue.

“The EDD scandal could be a very real burden for Newsom – it could be effectively used by even non-GOP challengers, should he face any,” said Rob Stutzman, who served as deputy chief of staff for Arnold Schwarzenegger, the winner of the last California governor recall effort, when he replaced Gray Davis in 2003. “It’s a simple scandal for voters to comprehend, and it generates incredulous responses from voters across ideological spectrums.”

“Newsom’s response to the scandal … at EDD has not met the level of outrage felt by voters,” he told RCP. “He inherited EDD, but he’s been running it for two years and hadn’t taken measures to fix it.”

At a recent oversight committee hearing in California, Democratic lawmakers were some the harshest critics after state Auditor Elaine Howle testified that the EDD had been aware of key operational issues – an inefficient claim filing process, a lack of qualified staff, and poor call management for nearly 10 years, but the department failed to address the problems.

“Last week’s state audits paint a picture as clear as day,” said Democratic Assemblywoman Cottie Petrie-Norris, who chairs the Accountability & Administrative Review Committee. “EDD has been mismanaged and unprepared from the very beginning. And working Californians are the ones who have suffered the consequences.”

Su’s Senate hearing next week will give both Republicans and Democrats a high-profile springboard to hammer Newsom over the rampant fraud, Stutzman and others predict.

“It’s not clear the Biden team has fully calculated how embarrassing this scandal of incompetence is for Su,” Stutzman said. He added that it could also become a stumbling block for Ann O’Leary, Newsom’s chief of staff, who is reportedly under White House consideration to replace Neera Tanden as the Office of Management and Budget nominee.

On a local level, Democrats in swing California districts are already trying to hold Newsom and his administration accountable for the unemployment failure. Petrie-Norris won reelection for her Orange County seat by less than 2,500 votes and will face the same challenger again in 2022.

“I think you’re going to start seeing people who won by slim margins trying to distance themselves even more from this sinking ship,” Dunsmore said of the Newsom administration.