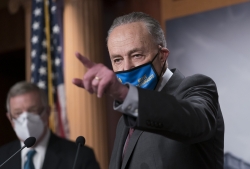 There is a crisis on the border that President Biden did not inherit but instead created, and while he belatedly tries telling migrants to stay home, some progressives are mad he isn’t doing more for the thousands packing overcrowded, unsuitable facilities. These same Democrats wanted Vice President Kamala Harris to overrule the Senate parliamentarian and include a $15 minimum wage increase in their COVID relief bill. Now they are demanding a kitchen sink of liberal wish-list items that have no chance to pass the 50-50 Senate, insisting Biden relent and agree to abolish the filibuster to pass climate legislation, the John Lewis Voting Rights Act, immigration reform, expanded health care and environmentally reimagined infrastructure.

Senate Majority Leader Chuck Schumer is cheering those frustrated progressives on, telling Rachael Maddow on her show last week: “We will change America in a big, bold way. We must. It’s an imperative, and failure is not an option.”

One could say Schumer is just keeping the party unified, doling out happy talk about things that, again, can’t happen as the rules currently allow. He is, after all, up for reelection next year and working to fend off a primary challenge from the left wing of his party. No one has to tell Schumer twice that the progressive left is a threat to his own seat and his position in history as the nation’s first Jewish Senate majority leader. Their energized faction has captured enough critical mass within the Democratic coalition that Biden’s victory in the nominating fight was considered an eleventh-hour surprise.

From student debt to cannabis, progressives now have Schumer on the front lines of policy debates that might have shocked his younger self. The once moderate lawmaker, who entered Congress 40 years ago as a “law and order” Democrat, helped write the 1994 crime bill progressives have castigated Biden for. He also voted against gay marriage in 1996, for the Iraq War in 2003 and for a border wall in 2006. After years of shoring up his reputation as a strong ally of Wall Street, Schumer now spends much of his time talking about wealth inequality and racial justice.

There is a lot Schumer is likely doing right. Yet he is gratuitously alienating Republicans in a 50-50 Senate where — while he is technically majority leader — Democrats preside over the chamber without truly controlling it. An evenly split chamber does not “change America in a big, bold way.” On most votes the vice president cannot break a 50-50 tie, so 10 Republicans are required for 60 votes to overcome a filibuster. For now Schumer is making it harder to find those Republican votes, not easier.

No one knows better than the four-term senator that the entire Biden presidency now revolves around the decisions made by fellow Democratic Sen. Joe Manchin, who is feeling quite comfortable bashing his own leader for refusing to court Republicans.

“I haven’t seen an effort by any of our leadership to go sit down and work with them,” Manchin said last week. “Just make that effort. Make a little bit more of an effort with him and Mitch McConnell and make an effort with the leadership. John Thune’s a very good guy. Roy Blunt, I hate to see Roy leaving. These are all good people.”

Not only has Schumer neglected to mend fences with Collins, or attempted to work together on legislation, he recently blamed her for Democrats taking too long to negotiate, and ultimately watering down, a bipartisan compromise for President Obama’s stimulus program in 2009. He also criticized the compromise Republicans, led by Collins, offered to Biden in the COVID-relief negotiations this year.

“We made a huge mistake in 2009 and ’10. Susan Collins was part of that mistake. We cut back on the stimulus dramatically and we stayed in recession for five years,” Schumer said on CNN. “What was offered by the Republicans was so far away from what’s needed, so far away from what Biden proposed.”

Collins was clearly horrified by Schumer’s outburst. “Why Chuck seems to be going out of his way to alienate the most bipartisan member of the Senate is a mystery to me,” Collins told Politico, adding, “It must just reflect his extraordinary frustration at having wasted $100 million in the state of Maine in an attempt to defeat me. And for me to win by a strong margin.”

In 2009, Collins noted, then Vice President Biden thanked her for her vote on their stimulus plan. “For Sen. Schumer to now say that this was a huge mistake and try to blame me, when he was in leadership and helping with the negotiations and voted the same way, it’s bizarre. It makes no sense,” she said.

Collins has also expressed concern that Biden’s chief of staff, Ron Klain, pushed the president away from compromise with the GOP on the American Rescue Plan and has retweeted posts critical of her. However, Klain has spoken with Collins about such concerns, and White House aides communicate with Collins and her staff several times every week, the Wall Street Journal reported. Schumer has not spoken to Collins since the election.

As the administration tries to sell their American Rescue Plan, they are also entering a period of negotiations with Republicans they hope will produce some, albeit smaller, bipartisan compromises as they push for a large infrastructure package Republicans aren’t likely to support. One of those initiatives is a Schumer project — introduced with Republican Sen. Todd Young — known as the Endless Frontier Act, which would overhaul the National Sciences Foundation. Young is also a member of the Common Sense Coalition that Manchin and Collins lead — the very first place Schumer would go to pick up GOP votes for his initiative.

So far Schumer seems far more focused on pleasing progressives than cooperating with Republicans, impressing Rep. Alexandria Ocasio-Cortez while he disses Collins. Ocasio-Cortez, who would represent the most serious threat to Schumer in any field of left-wing Democrats, has said she hasn’t made up her mind about challenging the incumbent next year, but that she is pleased the idea of her running has pushed Schumer left. Throughout, the newly progressive 71-year-old leader has kept Sen. Bernie Sanders and Elizabeth Warren close as well — they meet with him every Monday night at weekly leadership team meetings that also include Manchin and Sen. Mark Warner, another moderate Democrat.

Schumer is known for his constant contact, phoning Democrats at all hours to keep them united, but as they head toward a rough midterm cycle next year they will be known only for the bills they get signed into law. With just five seats needed for the GOP to gain control of the House and only one in the Senate, delivering results is the Democrats’ only hope to stave off losses that traditionally plague the party in control of Congress and the White House in a first term of a new president. Schumer, that former moderate, has watched a volatile electorate shift control of Congress numerous times throughout his career.

If he had every Democrat on board to nuke the legislative filibuster, wooing Collins — who has indicated she is willing to work with Democrats on raising the minimum wage and other issues — would still be the smartest course. But he does not. Both Manchin and Sen. Kyrsten Sinema have been emphatic about keeping the filibuster in place, and that while they may be willing to make it harder to use, they oppose eliminating it.

Schumer wants progressives to think he’s preparing to end the filibuster. Yet when Senate Minority Leader Mitch McConnell issued his threat of retribution last week, saying, “Nobody serving in this chamber can even begin to imagine what a completely scorched-earth Senate would look like,” he knew Schumer could imagine just that.

Since Schumer won’t “just make that effort” to reach out to Blunt or McConnell or Thune or Collins, as Manchin urges, it seems that failure is actually an option for the majority leader — as long as he wins his primary.

A.B. Stoddard is associate editor of RealClearPolitics and a columnist.