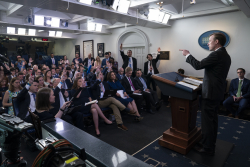 The two-minute warning had just been given when a voice came over the intercom in the James S. Brady Press Briefing Room at the White House, requesting that reporters please not stand in the aisles. No one listened, and no one left.

For the first time since March 16, 2020, all of the 49 blue theater seats were filled. The aisles to the left and the right, the ones that the disembodied voice wanted cleared, remained crowded. The briefing room was back to capacity on Monday afternoon, a pandemic mile marker for the capital city.

Looking out at all the faces, hardly any of them masked, White Press Secretary Jen Psaki noted that she was “very thrown off to where everyone is seated.” A year and a half ago, so was the former president.

While the rest of the country went through lockdowns, the White House press corps never did, at least not fully. They went on rotation. To keep the briefings from being shut down, the White House Correspondents’ Association agreed to limit the number of reporters in the room.

Social distancing was the initial prescription for the press during the early days of the pandemic when little was known about the virus coming out of China. Mask mandates from the WHCA came later but some reporters opted on their own to wear nose and mouth coverings. Others even wore rubber gloves until that went out of fashion with updated guidance from the Centers for Disease Control.

But looking out at fewer faces than normal in March 2020, then-President Trump liked what he saw. “You’re actually sitting too close,” he joked during one of the earliest COVID briefings — events that would come to define the early weeks and months of the pandemic. “We should get rid of another 75 to 80% of you,” he added. There were, he admitted, only “two or three” reporters there that he actually liked.

The vacant seats, in and of themselves, were unusual. So was the fact that the WHCA, the organization that represents journalists in behind-the-scenes negotiations with the administration, usually over securing more, not less, access, was instrumental in ensuring that social distance guidelines were followed. “It’s a huge story,” then-WHCA President Jonathan Karl told the Washington Post at the time. “It’s important for us to be there. But we have to be smart about it.”

But those changes also brought opportunities. Fewer reporters in the room meant more questions for those lucky enough to be in the rotation on any given day, and even correspondents from smaller news outlets became as prominent at the briefings as their typically more favored network colleagues, asking two or three or sometimes even four questions. Things have been similar in the new administration. Biden is less accessible than his predecessor, but Psaki holds daily briefings and worked her way around the room to ensure that most, if not all, reporters in attendance got to pose a question.

A briefing room at full capacity may have ended that little luxury. It was more of a scrum Monday with reporters shouting over each other at Jake Sullivan, calling that White House national security adviser by his first name, like an old friend, to get his attention. And while the Biden administration is normally more scripted, Sullivan did not call on reporters from a list. It was a free-for-all.

Psaki eventually took over after Sullivan had fielded about a dozen questions, taking care to give extra consideration to some of “the new people.” Psaki bombed at her one attempt at humor before the packed house. Her joke about former President Obama and his vice president “being reunited at last and it feels so good” fell flat. “Even a full room,” she said, taking a shot at herself, “and no laughs.”

After more than an hour of questions and answers, the briefing ended. A Playboy reporter shouted about deadlines for infrastructure as the press secretary walked out of the room, Psaki barely pausing to say over her shoulder that “a similar question was asked.” And then it was over.

All of it was a return to a kind of normal, albeit three weeks after the CDC announced that it was safe for vaccinated people not to wear masks indoors or outdoors anymore.

According to the WHCA, more than 97% of its members report being fully vaccinated, numbers that put an end to required COVID procedures: There were temperature checks in the early days and then the nasal swabs until last week. Now, nothing. Fully vaccinated journalists don’t need to get tested anymore. The White House won’t be asking for proof of vaccination.

“Since the onset of the pandemic, our priority has been to keep journalists safe, while ensuring that the critical work of informing the public could continue uninterrupted,” WHCA President Zeke Miller wrote in a letter announcing the new policy. “We appreciate the sacrifices made by every member of the press corps and we thank you all for your cooperation over the last 15 months.”

The rituals that defined that time period — the masks, then the multiple masks, the social distancing, the Q-tips shoved too far up noses for anyone’s comfort — are done with. The “strange, eerie time” is over. The new ritual for reporters is the selfie in the briefing room, a picture for social media to mark the end of pandemic restrictions.

The COVID-19 Delta Variant: What to Know

The highly transmissible COVID-19 delta variant, also known as B1617.2, was found in India in December 2020. It’s now